The UK vote for a Brexit is a huge blow for Merkel, Schaeuble, Gabriel, Juncker, Schulz & Co and for all servants of the banking and investment mafia as well. A majority in the third largest EU-country has had enough of the EU. Especially workers, the unemployed and trade unions have nothing to gain from the EU. This is yet another reason for building a Europe from below, built on democracy and solidarity.

Confronting this new situation, leading EU-representatives only find three things to say: Militarisation, Euro-expansion, laying down their law. This will only serve to sharpen the EU-crisis, forcing millions more to turn their backs on the EU. END_OF_DOCUMENT_TOKEN_TO_BE_REPLACED

The debate surrounding “Brexit” makes it clear: The EU is being idealised. Positive attributes are being ascribed to the EU, this organisation simply does not have. Below we take up four of the most common populist statements being made about the EU.

First populist EU-statement: “The EU is the greatest project of civilisation of the last decades.” So said Martin Schulz, president of the European parliament. The EU itself commits itself officially to uphold “the principles of freedom, democracy and the respect for human rights.” This is stated in the prelude to the treaty of the European Union (also called “Maastricht Treaty”).

Answer FCE: In reality the EU-institutions are incredibly undemocratic. European parliament is only given a few rights; EU-institutions like END_OF_DOCUMENT_TOKEN_TO_BE_REPLACED

Immediately after the success of the Brexit referendum UKIPs Nigel Frage pointed out, that he never ever backed a key promise of the campaign to leave the EU: The “350 million pounds weekly”, which should be given to the National Health Service, if only the transfers to Brussels have been canceled, these 350 million pounds – more than 420 million Euro – will never come. Not today, not in two years, never. He had not backed that promise. Only the former Mayor of London, Boris Johnson, now has to get rid of all the promises he made as front runner of the right wing Brexit campaign. END_OF_DOCUMENT_TOKEN_TO_BE_REPLACED

The situation is dramatically escalating for more than 50,000 refugees who are stranded in Greece, amongst them more than 10,000 in the fields near the fence in Idomeni on the frontier. The escalation is threefold: Firstly, because there is not enough space for refugees to stay overnight and camps on the islands are gradually resembling prisons. Secondly, because Greece is put under massive pressure by the EU, and in particular Berlin, to acknowledge Turkey as a “safe third country“ in order to enforce deportations on a large scale. Thirdly, because Turkey is showing day by day that it is not prepared to adhere strictly to the human rights turning down refugees on its borders, imprisoning refugees and deporting many – even to countries where they have to face torture and death.

In this situation, we appeal to the Federal Government of Germany to let the refugees who are stranded in Greece travel on trains of hope to Germany. German railway service Deutsche Bahn AG is in charge of more than two dozen sleeping cars having not been in use since the termination of the DB motorail trains in 2014. We could imagine that at Deutsche Bahn and at DB European Service, their subsidiary, there are colleagues who would like to work on these trains of hope.

Most of the refugees who are stranded in Greece would meet the necessary criteria to receive asylum in Germany anyway. Several thousands of them have a direct claim to safe residence in Germany because family members are already living in our country.

We remind you of the summer 2015, when the Federal Government of Germany and Deutsche Bahn were prepared to install similar trains of hope for the refugees stuck in Budapest back then. What Bodo Ramelow, governor of Thuringia, said some days ago referring to the refugees in Idomeni, we now say with reference to the refugees being stranded in Greece: “We can do it!“

For the expert group “railway for the people instead of the stock markets” (Bürgerbahn statt Börsenbahn – BsB):

For the campaign group “Train of remembrance”:

We ask you to support our apeal: [Apeal is closed.]

NO to EU Blackmailing on Greece – YES to Open Borders: EU is responsible for Economic Misery, for War and Fleeing

We shared the thrill. We shared the pain. We shared the fight. Then, in spring, when Tsipras and Varoufakis denounced Troika’s destructive politics. Then, in summer, when Greek referendum ended up in the overwhelming OXI. At least since Greek government and the parliament in Athens – resulting from EU’s blackmailing politics – by a majority voted for a third Memorandum and thus for an aggravation of austerity, opinions differ again. Now with September 20th Greece has voted (once again) – and we have arrived where doubters of parliamentary solutions had remained in January.

What can we learn from the experiences so far? What is the situation, what are the prospects now in Greece? What does that mean for us and for the Left in Europe? Greece and us. Conference in Berlin on October 17th/18th 2015 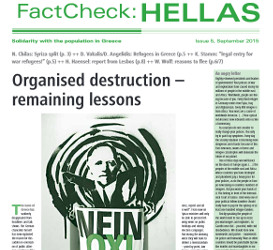 This is the fifth issue of the FactCheck:HELLAS magazine founded in April (download pdf). It is published in Greek as a supplement of the Athens based daily newspaper EFSYN. Digital editions published in Spanish and English.

The electoral victory of Syriza in January 2015 started an intense, political and economic conflict on economic alternatives in Europe and the chances of their realization. This conflict is far from over. At the beginning of July the Greek population refused with impressive majority the blackmail of the Troika. But a few days later the Greek government gave in. Not only in Greece there is now anger and frustration instead of hope and enthusiasm.

Since April the independent newspaper project FaktenCheck:Hellas discussed these developments and tried to make a contribution to the “solidarity with the population in Greece” – what is the newspaper’s subtitle. 200.000 distributed newspapers altogether, financed by the readers (!), a Greek edition of the issues 3 and 4 as supplement to Efsyn in Athens, online editions in four further languages (English, French, Spain, Italian) –all this indicates, that from Berlin an internationalist discussion started. We want to take the next step. Even if arguments do not matter at Eurogroup meetings – for a democratic alternative well founded arguments are crucial.

From September 18th thru 20th we organize a conference in the Berlin “House of Democracy and Human Rights” – to give a voice to different positions, approaches and experiences. The conference will deal with three subjects: END_OF_DOCUMENT_TOKEN_TO_BE_REPLACED 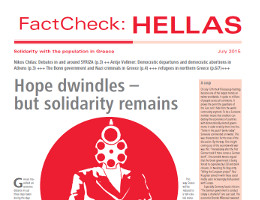 This is the forth issue of the new FCH magazine founded in April 2015 (Download PDF). FactCheck:HELLAS is being produced in German since April 2015. Issue 4 appears in the following six languages: German, Greek, English, French, Italian and Spanish. As of issue 3 FCH is also being published as a supplement for the Greek daily EFSYN (“the journalists newspaper”). We ask for generous donations, massive support and optimal distribution. Your FCH editors.

The democratic and social Europe, in any case an unfinished project, has been staring into the abyss since the end of June 2015: But the creditors live the luxury life in the Grand Hotel enjoying the view, whilst the debtors sit on the edge of the cliff, always threatened with falling into bankruptcy.

A so called Troika of powerful institutions has turned threats into blackmail. Debtors like Greece are not given any chance. The treat of bankruptcy is used to enforce government compliance. Social and political alternatives to Austerity are taboo. Even the referendum proposed by the Syriza government over the cuts package demanded by the Troika is is being interpreted as a provocation by the Eurogroup finance ministers – who themselves are a technocratic club, not a political and democratically accountable body. They punish Syriza’s democratic initiative by excluding the Greek finance minister from meetings of the so called Eurogroup. They shamelessly break European law END_OF_DOCUMENT_TOKEN_TO_BE_REPLACED

Greece faces national bankruptcy. It could slide out of the Euro-zone in the coming days. Then a cash check will be needed in any case. But even if the country manages to stay in for now as part of a compromise agreement the threat of bankruptcy remains.

The troika, both old and new, is responsible for the destruction caused in this EU-country. This troika in reality consists of the International Monetary Fund IMF and the EU as the representatives of European big business and the Berlin government. In the months between June and September alone Greece has to pay the creditors more than the maximum amount it can expect to get (13,1 billion Euro) – even if the full tranche of agreed credits is paid out by the creditors (7,5 billion Euro). During the last few weeks those responsible in Athens ordered the last remaining Euros to be scraped together – even out of a disaster relief fund. The media reacted with indignation: “Accounts plundered” (Sueddeutsche Zeitung from Mai 13th). Who is plundering whom? The drastic measures in Greece come about because IMF, EU and the Berlin government have plundered the country for the last five years. Because these three have been strengthening their stranglehold since the end of January 2015. And because they cloud our senses with their screams for the alleged necessity of “austerity” whilst they are at it. END_OF_DOCUMENT_TOKEN_TO_BE_REPLACED

Find out more or adjust your settings.

This website uses cookies so that we can provide you with the best user experience possible. Cookie information is stored in your browser and performs functions such as recognising you when you return to our website and helping our team to understand which sections of the website you find most interesting and useful.

Strictly Necessary Cookie should be enabled at all times so that we can save your preferences for cookie settings.

If you disable this cookie, we will not be able to save your preferences. This means that every time you visit this website you will need to enable or disable cookies again.